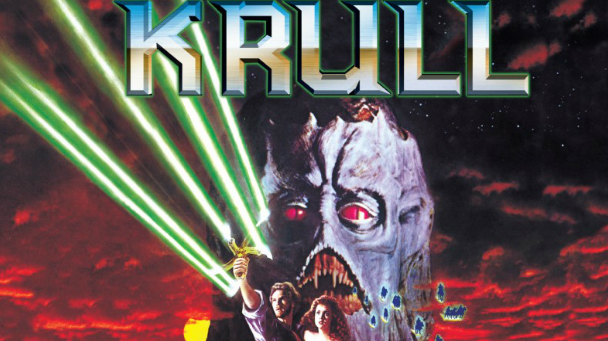 The early 80s saw a boom in fantasy and effects films, brought on by the success of Star Wars, which had opened up the floodgates for movie projects that might previously have been considered unfilmable. In much the same way the birth of CGI effects in the 90s led to many movies going into production because there were new possibilities for doing the visuals, the early 80s were a time for experimentation.

Krull is one of the stranger films in the fantasy canon, as it does not draw upon any established mythology or history, but presents an entirely fantastical world, and it also includes some elements of Science Fiction and even Horror in ways not usually done, and it does it all with a lot of energy and some really innovative visuals.

A British production, Krull was directed by Peter Yates, director of solid action/thrillers like Bullitt and The Deep. He was never known as an especially adventurous craftsman, but he saw the script (Originally The Dragons of Krull) as a chance to stretch out and try new things.

The script is pretty much the usual tropey fantasy junk that was passed off in dozens of 80s movies, with the One True Hero riding off to Rescue The Princess with the power of the yadda yadda yadda. Prince Colwyn has a Wise Mentor, a comic-relief Inept Wizard Sidekick, and a trademark Ragtag Band Of Freedom Fighters. There’s nothing you have not seen in a dozen other movies, though there is some interest in the cast. Krull features early parts for both Liam Neeson and Robbie Coltrane, and also gave Alun Armstrong his first widely-seen feature role.

Even with a decent amount of star power, you can’t say the performances are very good. Ken Marshall tries gamely, but he’s just not very charismatic in the lead role. Lysette Anthony is gorgeous to look at, but she doesn’t have much to do, plus all her lines were dubbed over by Lindsay Crouse after filming was over. The late, great Freddie Jones is overacting like crazy as Ynyr, but at least he’s got some gravitas. His scene with the beautiful Francesca Annis as the Widow of the Web is the most affecting, genuine scene in the whole movie.

What really sets the movie apart, and has done a great deal to make it a cult classic, is the arresting and original art direction and the overtones of SF and Lovecraftian horror that color the story. The villain of the film is known only as “The Beast”, and he comes from outer space in his flying black fortress. His minions are the white-armored Slayers, who wield both blades and some sort of energy weapons, and when killed they collapse and some kind of worm or slug emerges from their skulls and burrows into the earth. Ew.

The Beast himself, when he is revealed, is a towering, misshapen figure with pulsing, gelatinous skin and glaring red eyes. He can read minds, change his shape, and seemingly controls the very form of his fortress, causing it to shift and alter in some startling ways. The interior design of his tower is really cool, drawing on Giger and Bosch to create weird, organic landscapes like nothing else in film. The whole design adds a layer of strange grandeur to the scenes within the fortress, and creates an air of mystery and Lovecraftian gulfs of unknown time and space.

Another plus is the epic, sweeping score by James Horner, who was then just beginning to break out, and his lively, swashbuckling work really adds another dimension to the movie. It’s the kind of lush, string-and-horn heavy score that sounds like a cross between a Robin Hood movie and a Space Opera.

The movie was famously expensive, the budget ballooning to $30 million in 1983 money (equivalent to about $75 million today) largely due to sets and costumes having to be redesigned as the script was constantly rewritten. It points up that in the early days of big-effects movies, directors did not yet understand the absolute necessity of previsualization and tight storyboarding to keep costs down. Plus, the effects crew was often trying techniques that no one else had ever used, and sometimes they didn’t work out and had to be either scrapped or redone. In places, the movie looks pretty rough, but you have to keep in mind that they were pretty much making shit up as they went along.

Despite a lot of effort spent to market it, Krull was a financial failure, and didn’t get many critical accolades either. A lot of the cast and even the filmmakers seem pretty embarrassed about it, but over time, it has built up a cult following among fantasy fans, and despite its flaws it engenders a lot of affection. Even now, the design and sets stand out, and present sights you won’t see anywhere else. Even though it looks cheap in places, it avoids the bargain-basement look of so many 80s fantasy movies, and having a villain from outer space is an original twist that I don’t think anyone else ever used. Even almost 40 years later, Krull still stands out.
Posted by New Iron Age at 3:39 PM