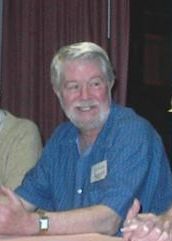 One of the more entertaining authors caught up in the Sword & Sorcery movement was a prolific writer named Andrew Jefferson Offutt – though he wrote under no fewer than twenty pseudonyms in his life, and maybe as many as thirty – no one really knows. Born in 1934, his career spanned fifty years and a multitude of genres through the so-called Golden Age of Science Fiction, but he only really came into his own in the sex-obsessed 70s.

Because while nominally a science fiction writer, this man, born in a literal log cabin in rural Kentucky, was maybe the most prolific pornographer of the twentieth century. He wrote at least 420 books of erotica and pornography under about twenty pseudonyms and house names – again, no one is really sure.

However, he was also a highly prolific writer in the field of Science Fiction, even serving as the president of SFWA in the late 70s for several years. He also wrote fantasy. Some of it was “sexy” fantasy like The Passionate Princess, but he wrote serious works as well. He edited the highly-regarded Swords Against Darkness anthologies, which ran to five volumes and included many of the old pulp writers like Manly Wade Wellman as well as new voices like David Drake.

Offutt also wrote Howard pastiches, and he generally did well by them. He wrote a trilogy of Conan novels: Conan and the Sorcerer, Conan the Mercenary, and The Sword of Skelos, all of which have been adapted into comics, and are some of the better-regarded pastiche works. In a way he helped really set the mold for all the works that followed, keeping to Conan’s established timeline and “filling in” the blank spaces in his biography.

He also wrote a much longer series of books about the minor Howard character Cormac Mac Art. Cormac was a wandering Irish warrior of the Dark Ages, loosely based on the historical Cormac Mac Airt, though the fictional Cormac dwelled in the eleventh century, not the third. Howard never wrote more than a few stories about him, though the ones he did include such awesome works as “Tigers of the Sea”.

Offutt ran with this, and ended up producing six Cormac books, filling in far more of the Irishman’s history than Howard ever did. Offutt was not the prose stylist that Howard was, and he tended to be more comfortable describing sex than violence. Yet his stories maintain a kind of breezy energy and a light touch that makes them eminently readable. Offutt did not have the signature Sturm and Drang of a real Howard story – it just was not in him – but he had respect for the source material and a sense of adventure that kept him going.

He had a full and varied career, was married for fifty years, had four children and five grandchildren, and died at 78 in 2013. He was such an elusive presence that it is not easy to find pictures of him. A writer of many names, he let his work do the talking.

The Temple of Skulls

Magan pressed onward through the jungle darkness, bloodied and exhausted, his body aflame with a dozen lesser wounds. The undergrowth ripped and tore at him, and he used his sword to hack at the vines that barred his path. The moon was high, and though the vaulted canopy of trees he saw the glow of it like silver whenever the branches parted enough to let it through.

Weariness dragged at him, and he ached to stop and lay down his body on the steaming forest floor and rest. He dared not, for he knew they were coming behind him. He did not hear them; he did not see them, only the blood-scent on the night wind bore any warning of their approach. The huntresses of the black jungle, the shapechangers, the Shanjama.

He did not know how long it had been since the ambush. A day? Two? The days were filled with mist, and the rains that fell at noon obscured the sky. He wandered in among the mighty trunks of the ancient trees, ever watchful for the many dangers of the highland rainforest – the snakes and venomous insects, the hungry reptiles and stalking leopards. Now he was far from the places known to men, deep in the trackless jungle, and he knew worse than vipers awaited him here.

Yet he dared not turn back, for fear of the certain death that followed behind him. He had entered their taboo lands, and they would not turn aside. The witches were on his scent, and he knew he would not easily lose them. He sought a river or a stream in this hellish, humid place. Here where water dripped from every leaf and vine, where it ran down his black skin, mixed with his own sweat and rotted his scaled armor from his body hour by hour – here he would gladly slay for even a rivulet of a stream that he might use to hide his scent.

He fell back against a root-bole as tall as a bull and panted for breath. The night was alive with the sounds of the jungle – the screams of insects and the howls of apes. The ground on his path sloped upward, and he knew he was being driven higher and higher into the mountains from which no man returned. He prayed then to Maklanjalu that he might live to see the Golden City again – to stand before the king and tell this tale.
Read more »
Posted by New Iron Age at 12:49 PM No comments:

Winds From the East 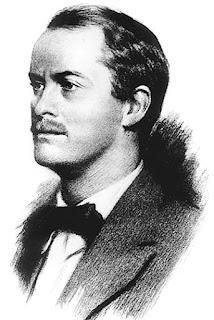 Stepping backwards a bit, we find a writer who was instrumental to the formation of Sword & Sorcery, yet died before it was named, and was very much a part of an earlier generation of pulp writers. Born William Lancaster Gribbon in Hammersmith, London in 1879, he was later known to millions as Talbot Mundy, one of the giants of the Adventure genre.

Along with H Rider Haggard and the better-known Rudyard Kipling, he was part of that generation of westerners fascinated by the strange locales and mysterious cultures of what was then called – without irony – the “Orient”. In fiction that could encompass anything from Istanbul to Tokyo, though Mundy’s focus was very much on the traditional hotspots for authors in his line: Africa, India, and Afghanistan.

His education was unremarkable, and he spent some years knocking around the British Empire in the long afternoon of its existence. He was a journalist in India during the Raj, poached ivory in Kenya, served briefly as an official, and then came to New York where he found himself without prospects. At the age of 31 he finally found his calling, and began to write adventure stories set in the far-off places he had lived, drawing on his experiences there, and he became a success.

Mundy was never as successful as his contemporaries, though he did well enough. Unlike Kipling and Haggard, he took a definite anti-colonialist stance, and his work showed a greater positive interest in foreign cultures and peoples. So of them all, his work comes across as less dated than his better-known peers.

He was also hugely influential on early S&S writers like Howard and Fritz Leiber, who praised his work, and you can see the effect on their own. Howard in particular was a fan of Mundy, and you can see his influence in Howard’s “Oriental Adventure” tales like his stories of El Borak and “Swords of Black Cathay”.

The biggest influence on Howard – and thus on Sword & Sorcery in general – comes from Mundy’s massive historical fantasy Tros of Samothrace. It is a book so huge it has usually been broken up into multiple volumes. It tells the story of the title character as he adventures around the edges of the Roman Empire, doing battle and making alliances with northmen, Gauls, Bretons and Irishmen. The book was controversial at the time it was printed for its depiction of Caesar and the Romans as tyrannical, when the tenor of the time was to see them as civilizers of barbarian peoples in Europe.

It is obvious that Mundy’s epic of Tros and his battle against Rome electrified Howard, who always felt his sympathies with the downtrodden and barbaric races of the borderlands. One of Howard’s pet ideas was the Picts – a brutish, unlovely race that he saw as being utterly primordial, dating back to the dawn of time. His classic stories of the Pictish King Bran Mak Morn: “Worms of the Earth”, “The Dark Man”, “Kings of the Night” – all of them resonate with the theme of outsiders forced to battle for their lives against tyranny, and they remain among his most emotionally compelling works.

Mundy was an odd man. He was fascinated by mystical ideas, and drifted from one religion to another throughout his life, eventually seeming to settle on the bizarre cult of Theosophy – kind of the Scientology of its time, complete with loony ideas and a charismatic leader. He was progressive in his ideas on race and gender equality – certainly very much so for his day.

Late in life he was afflicted by diabetes, and his health declined severely. He died in bed at his home in Florida in 1940, having never stopped working at a breakneck pace, leaving behind almost sixty novels and a legacy that still lives on.

Under a dark sky, upon the field of the dead, the Mor Clan marched to battle, and I went with them. It was cold on that day, the wind from the northern mountains like a blade. We wore heavy furs and huddled our faces into our hoods as we made our way among the graves made of piled mammoth bones. It was spring, and the grass was greening, red flowers everywhere, but the air was still bitter cold, and the sun lay low upon the southern horizon, a dim glow like an ember behind the clouds.

I was seventeen, and honored that day to walk in the company of our greatest warrior, Karg. I stood in awe; I walked in his shadow trembling in every limb. Karg was terrible and vast, a head taller than the tallest of us, and broad as a tree about the middle. His shoulders were draped with the skin of a sword tiger, and his helm was bronze turned to deep green by the years, set with the tusks of a great boar. I carried his spear with reverent hands, and another bore his shield as long as a tall man. At his side hung the long bronze-bladed sword of legend.

We marched against the Gul Clan, who had come down upon our village in the dead of night while a hard snow fell and the wind howled. They killed six of our men and carried off more than twenty women and children. They stole food and beasts and drove them away into the dark. Many of the warriors had been away on a hunt, and when we returned we found blood and sorrow. Now we marched with rage, for vengeance.
Read more »
Posted by New Iron Age at 9:01 AM No comments: