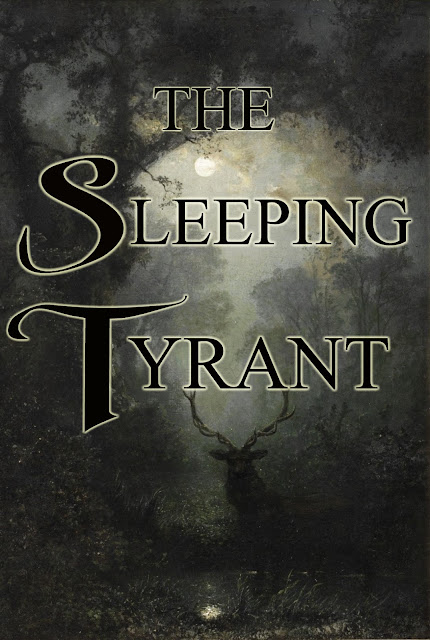 No posting today, but next week will be the launch of next year's multi-part epic series The Sleeping Tyrant.  So stay frosty.
Posted by New Iron Age at 9:53 AM No comments:

The Howling of the Gods

The wind was a curse, and above the scream of it as it lashed over the mountain peaks, Hel-Toth heard the howling of the gods. They dwelled high on the razor peaks that bounded the southern edge of the world he knew, and that his people called their home. When the wind came, their voices could be heard, uplifted in terrible cries that kept back the dark beings that dwelled over the border of the earth, awaiting their time to come forth and devour all that lived.

It was a black winter day, when the sky hung low over the unbounded forests, and Hel-Toth made his way among the great boles of the trees. They were not like lesser trees, such as a man might cut down to build a sword-hall, or hack into wood for bone-fires. These were trees of the elder forest that stood upon the earth before the ages of the ice, and they were like the pillars of the sky. He carried his bow ever-ready to draw and bring down the great red deer that lived in these woods, but today he saw no sign, no spoor.

A storm was coming, and he tasted it on the air like bitter gall. When night fell the snows would fall, and none should dare to be out in the dark, lest they be carried away in the wind and buried so deeply they would never be found. Hel-Toth was young, but he had seen the terrible power of the storms of deep winter.
Read more »
Posted by New Iron Age at 2:59 PM No comments: 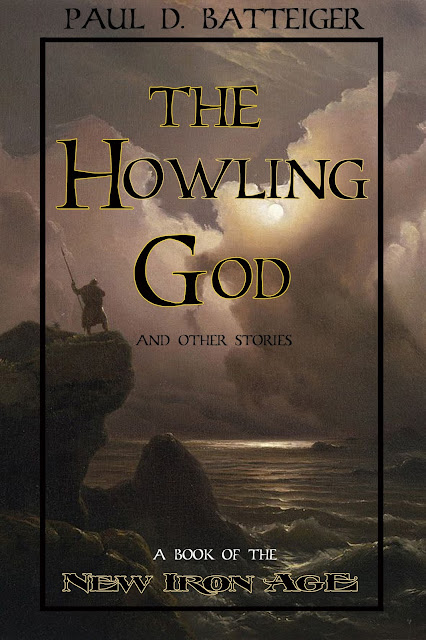 Here is the cover for the collected stories, which I will plan to have available by the first of the year.  There will be one more story this year, and the ebook will include a bonus story, so there will be 27 stories in all.  Donors will receive a code for a free download, and everyone else will be able to get it on Smashwords.  I plan for the stories to be presented in the order they posted in, except the series, which will be placed together.  Credit for the cover painting goes to Knud Baade Scene From the Era of Norwegian Sagas (1850).  Design by me.
Posted by New Iron Age at 2:25 PM No comments:

Brothers of the Serpent

Alzarra Dragonhand was brought to the Ukar islands in chains, lashed to the mast of a reaver ship stained with blood under a horned moon that turned red with an oncoming storm. The horizon was dark, shot through with lightning, as all the seas from the Ukar to the Strait of Hazul surged and boiled with one of the great summer storms that scourged the tropical coast.

The ship swept through the dark water and into the protected harbor of the corsair stronghold, oars slashing the waves and the serpent head upon the prow rearing up with bared fangs. Alzarra stood with her feet braced on the deck, feeling it heave beneath her as the seas deepened. Her wrists were clasped by cruel steel manacles, and a heavy rope circled her body and bound her to the mast. She thought perhaps she could break loose, but not yet.

The men on the deck divided their attention between the oncoming shore, the darkening horizon, and the woman they feared more than either. She had slain a dozen men before they took her sword from her and bound her in place, and now they came to land and they knew they had to unbind her to bring her ashore. And they had to keep her alive, because she bore the mark of their ancient kindred – the left hand scaled like the back of a dragon from which she took her name.

They drew up at the ancient stone jetty, and they gripped her chains and hacked through the ropes, and she did not resist as they dragged her from the deck of the ship and onto the shore. She looked up through the mist-haunted sky and saw the savage stone towers of the ancient city reared in another age, now covered in vines and hung with jungle flowers. She walked, a prisoner, up the streets that led between the ruins, filled with men and women of a dozen nations, and she knew this was what she had come to find.
Read more »
Posted by New Iron Age at 6:25 PM No comments: