The armies of Meru moved with the night, traveling ancient paths beside the swollen river in full flood. The sky was clear and the stars were bright as glass, lighting the way through the scrubland. Trees grew in the risen waters, their roots arching up from the mud like the legs of crouching animals, their trunks twisted and hardened by the long dry season even as their leaves uncurled like hands.

Utuzan rode at the heart of his army, shrouded and hooded even against the light of the stars. His power caused a pillar of fire to go before them, lighting the way for man and beast alike. The Heart of Anatu glowed in his hand, pulsing with the power he had embraced when he was only a boy. It led him and followed him and whispered to him, so that he knew the power of his goddess was with him.

Close around him rode the nomads of the desert, those who had become his followers. More and more had come in from the waste lands, willing to pledge their swords and their blood to the Black Flame. They had ancestral tales of the lands of the old empire, and they remembered in their legends the time when the Sea of Xis had made the desert a paradise. They believed they were the descendents of the people of Kithara, and they might indeed be – Utuzan himself did not know.

What mattered now was they believed in him, and in the future of conquest and power he promised. Thirty thousand of them rode beneath his banner, and their arrows and spears would carve a path through these lands. He knew what kind of weapon they were, for even in his day there had been those who lived on the edges of the empire. Men who spurned to plant or reap, who lived only by pillage and war. They were a sword in his hand to strike at those who stood before him.
Read more »
Posted by New Iron Age at 12:44 PM No comments: 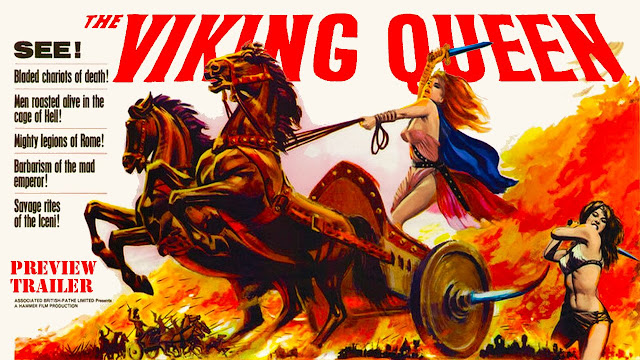 Despite their reputation in horror films, Hammer Studios did make other kinds of movies, including quite a few crime thrillers and dramas, they only made a few ventures into genuine adventure films – mostly in the form of some fun but minor pirate movies (The Pirates of Blood River) – and this one, their sole effort at the so-called “Sword & Sandal” picture, which was rather popular at the time, and would seem to have been a good move for them.

Released in 1967, The Viking Queen has nothing whatever to do with vikings, being a rather loosely-based retelling of the Iceni revolt around AD 60, when there were no proper Vikings to be found anywhere. There is a hint in the film that the titular Salina is the daughter of some kind of Nordic princess married to the Briton king Priam, but that’s the only reasoning you get for the name.

We open with Roman Britain, and the Iceni have been placed under Imperial rule. Dying King Priam agrees to a treaty that leaves equal power to both the Roman Emperor and his chosen successor, his daughter Salina, passing over his other two daughters in a kind of reverse-Lear move. One of his daughters is power-hungry and pissed off and wants to revolt against the Romans, and the chief of the druids, Maelgan (played with wonderful overacted fanaticism by Donald Houston) also wants a rebellion.

The crux of the movie is that Salina is in love with the Roman governor, Justinian, and they both want a peaceful coexistence, while seemingly no one else does. Salina’s sister conspires with the druids to whip up rebellions, while Justinian’s second-in command, Octavian, seemingly wants nothing more than to rape and pillage everything in sight. Octavian is the real villain of the piece, portrayed with wonderfully oily contempt by Andrew Keir, who went on to memorable turns in Quatermass and the Pit and Blood From the Mummy’s Tomb.

Things predictably go south rapidly, and Queen Salina is accused of treason and flogged in a brutal scene that is still kind of hard to watch. Then we have a full-blown uprising, with horse charges, chariots, and a final, tragic ending.

Directed competently by Don Chaffey (One Million Years BC, Pete’s Dragon) the movie didn’t do well in the box office and seems to have snuffed out forever the idea of Hammer making more like it. You can see why it failed, as while it has some good parts, it is overall very slow, with almost the entire first half taken up with political maneuvering and the forced love story, which doesn’t work at all. The whole film was marketed as a brutal, savage adventure, while the script is leaning much harder on the doomed love story. But the actors don’t have any chemistry at all, and when they are supposed to be mooning at each other and talking about how in love they are, it just comes across as tremendously awkward.

Once the revolt gets swinging, things pick up, and you get some genuinely good charioteering scenes, which for once manage to make chariots look fun and cool. The battle scenes are okay, nothing amazing, and there is very little blood to be seen. The Roman armoring and costuming is solid, but the look of the Britons is just kind of vague and uninteresting.

The acting is a mixed bag. Finnish model Carita is surprisingly good as the central character, but Don Murray as Justinian is just miscast. Patrick Troughton is here in a supporting role (apparently he got the call to play Doctor Who while he was filming this movie), and the lovely Nicola Pagett gets to ride around on a chariot and stab people, quite a change from her more numerous drawing-room roles. There will be quite a few familiar faces in the background if you are at all a fan of Hammer films, and overall the performances are neither better nor worse than one usually gets in the movies from this period.

You would think that this kind of barbarian epic, with its casual near-nudity and violence, would have been a good fit for a studio like Hammer, who were using a similar formula over on the horror side to great success. I think this movie was just overall not lurid enough to live up to the sensational promises of the poster. I wish we had gotten more, better films in this vein from Hammer, and I wonder what would have happened if they had decided to adapt some Howard stories, or even do some Solomon Kane movies. I mean can you imagine? That would have been amazing.

Island of the Gods

In the lands of Ashem the Nahar river spread wide over the fallow fields, inundating the lowlands with the seasonal flood that brought life. Even in the dry season the river was wide here, forming a long, jagged lake that shone blue beneath the pale skies and the noontide stars. At the center of lake Sedem was the high, rocky island of Mannat, and on it stood the polished stone palace of the Kings of High Ashem and the vaulting dome of the temple of Hadad, the Father of the Sun.

The palace was of bright stone smoothed and whitewashed with lime, then painted with intricate designs and inlaid with polished stones of a thousand bright colors. The walls were engraved and illuminated with the stories of the gods. Of Uannan the Wise, who brought fire to mankind and taught him to plant and to harvest. Of Slud, the powerful spirit of the river itself, who brought life or withheld it at his whim. Over all was the bright golden sun of Hadad himself, the one who created light and all life, the one who ruled the heavens.

The roof of the throne hall was covered in bright gold, and so even as the day faded and the sun streamed red through the high windows and crimson curtains, the gold threw back the light and washed the entire chamber. It turned the bronze of the guards’ armor and spearpoints to gold, it shone on the gleaming floor, and it lit the crown upon the brow of Khumu, King of High Ashem, thirteenth of his dynasty, third of his name.
Read more »
Posted by New Iron Age at 3:26 PM No comments: