So the first year of New iron Age is drawing to a close.  I think the stories have been good, and even if the success of my Patreon has not been as good as I hoped, it's not bad.  There will be room for 4 more stories this year, and then I have to decide where to go from there.

I have concerns about burning out, about my stories starting to become formulaic or too much like one another.  24 stories in a year is a lot, and I don't want the quality and variety to drop off.  I have tried really hard to make all the stories different - settings, plots, characters - and not just fall back on the same tropes.  As the year has gone on, I have had some characters I wanted to return to, and see more of, so I have done a few sequels.

But I am thinking about next year.  Should I just keep on in 2017 or should I try something new?  Specifically, I have been thinking about doing a novel-length story next year, spread out over the 12 months.  2 chapters a month at the similar word length as the stories will yield me a novel-sized manuscript by the end of the year.  I have a good idea for it, and I think it could be cool.

So what do you guys think?  My readers?  I know there are people who come here every week to read the articles and the stories.  The articles will continue, but how about a longer-form story?  Tell me what you think.

And if you have not yet joined my Patreon, then this is a great time to show your appreciation.  Every dollar helps, and next year I intend to come up with some stronger perks.  Thanks so much to my donors!
Posted by New Iron Age at 1:30 PM No comments:

The City of Gold and Fire

The sandstorm blew like a devil for three days, and then on the third the winds died and the sun rose and Mansa emerged from the cave where he had taken shelter. The sky was a hard, cruel blue overhead, the horizon hazed with the last remnant of the storm, and all around him were drifts of sand and the bare rocks of this desolate place. He had the clothes he wore, a half skin of water, and his sword, and that was all.

Hungry and wiping grit from his eyes beneath his turban, he climbed out of the half-buried cave and waded through the sand until he could climb onto a spur of rock to try to see where he was. The storm had come on so suddenly, there had been no time for the caravan to find shelter. The men and horses and camels and the wagons all scattered, hunting for shelter, trying to stay together even as wind and blinding sand forced them apart.

He saw nothing. The ground here was rocky, pillars of it rising up into the clean sky, the stones cut by many ages of wind and sand into strange, suggestive shapes. There was no trail in the sand, and no sign of any other living thing. The many rocks made this like a labyrinth, and he could not see very far in any direction.

The sun told him which way was east, and so he would go that way. He took the time to unwind his turban, shake the sand from the cloth, and then rewind it about his head. He rubbed the small gold amulet he wore and muttered a prayer to the warrior goddess who guarded his people in times of danger, then turned his face to the sun and began to walk.

He passed among the rocks, walking in and out of shadows cast by the monolithic stones, and then he stopped when he saw what lay before him. Two of the pillars of rock, hewn over aeons by wind, had been also worked by a more mortal hand, and he saw in them the shapes of towering warriors, decked in scaled armor and great shields. They held swords close to their sides, and their faces, while blurred by time, were both fierce and grave. They stood many times higher than a man, and they had an aura of waiting.

Beyond them he saw a valley of red stone and piled sands, with nothing to give any sign of habitation. Yet the stone giants had an air of guard, as though they kept an eternal watch over this place. Mansa stared at them, wondering what civilization could have raised such things in the waste. So far as he knew there had never been any city or nation in this place. 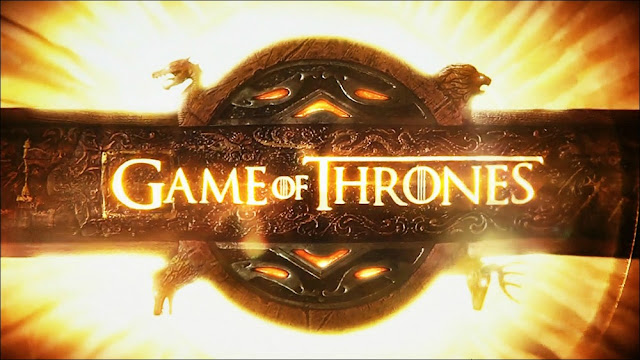 It’s obvious at this point that the great fantasy phenomenon of our time will be remembered as George R. R. Martin’s A Song of Ice and Fire, known more colloquially by the name of the TV series A Game of Thrones. It’s unusual for a fantasy series to make this much of a cultural impact beyond the bounds of the genre, and the last time this really happened was with the popularization of The Lord of The Rings in the 60s and 70s. Martin’s work draws a lot of comparison to Tolkien, and there are often expressions of surprise that an epic fantasy could be so dark, but that is because it’s not really an epic fantasy.

Comparisons with Tolkien’s work are amusing but ultimately useless, because Martin is not writing epic or “high” fantasy like Tolkien avowedly was. Tolkien was inspired by myth, framed his stories as myth, and wrote them in a mythic style informed by his time and place. Martin is writing Sword & Sorcery, and the whole work has to be looked at in this light.
Read more »
Posted by New Iron Age at 1:25 PM 2 comments:

The rising moon was red upon the desolate horizon, and wind moaned around the tents and fires of the army. All around rose the foothills of the Ushramu mountains, stark and treeless, black against the jeweled sky. The camp spread out along the narrow river that snaked through this ancient valley, every tent staked tight against the night winds. Banners fluttered and snapped like the fires themselves, and the men around them drank their wine and looked up to the ruined tower that thrust black into the sky. The stories told of that tower were passed from fire to fire, and those who heard them for the first time shuddered and made signs to protect against evil.

In a grand black tent at the camp’s heart lamps were lit and voices raised. Inside was a panoply of stolen finery: rugs and tapestries, silks and jewels. Gold spilled carelessly from cedar chests, and lovely young girls lounged naked upon silken cushions, their only adornment baubles and trinkets ripped from the bodies of princesses and kings. Braziers of green copper breathed strange incense into the close air.

At the center of the great pavilion Sisyphus the Elamite, usurper and wizard, reclined upon his divan, resplendent in his black-jeweled robe. His shaved skull reflected the red lamplight, revealing the whorled tattoos that covered his scalp. Only a single scalp-lock of his black hair trailed from his head into a knot of braids. His eyes were dark as burned iron, lit by his terrible ambition and dark powers.
Read more »
Posted by New Iron Age at 1:24 PM No comments: 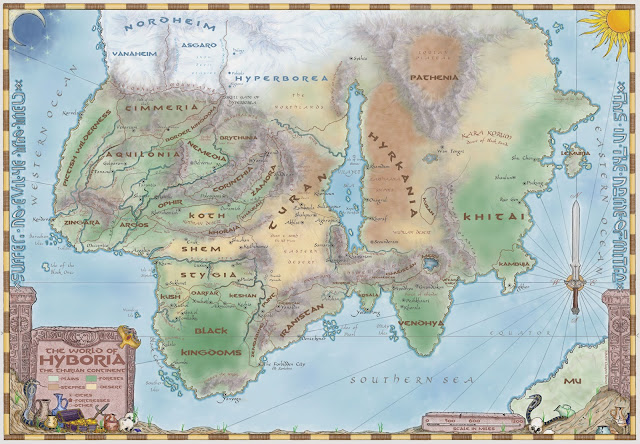 Sword & Sorcery is a rather unique subgenre in that it can exist in different kinds of fantasy worlds. Most S&S exists in what are called Secondary or Constructed worlds – completely imaginary worlds designed, as it were, from the ground up – while other stories in the genre are told in a genuine historical context.

This is, again, largely a legacy of Howard, the inventor of the form. Most of the models he had for adventure stories were of one of two types: historical adventure, or what are called “Lost Race” stories set in some unexplored corner of the earth. Talbot Mundy was the king of the historical adventure in his day, and a big influence on Howard. Some of his finest works are tales like “The Grey God Passes” or “Worms of the Earth” which are expressly set in the real world. Howard was drawn especially to the years of Roman Britain, or the dark ages of Celtic or Viking Europe.

But like a lot of writers, he felt constrained by history. It was not always possible to tell the kinds of stories he wanted in a real time and place, even one as poorly documented as the Dark Ages. Plus, history requires research, and the ever-present chance that some new finding will make your story look foolish. Even in Howard’s time, the blank spaces on the map were shrinking. Lost Race tales of hidden valleys and forgotten civilizations were becoming harder to get away with.

So he made his own world. He was not the first. Other writers had done it before, most famously the pseudo-Arthurian world laid out by William Morris in The Well At The World’s End and by Lord Dunsany with Pegana and the stories set there. Neither of these were quuuite like modern Constructed Fantasy worlds. Morris’ world was too reminiscent of our own, and Pegana was more poetically evoked than detailed. Also, Howard wanted a world that resembled our own history but was not bound by it. A gritty, barbaric world for his gritty, barbaric stories.
Read more »
Posted by New Iron Age at 2:31 PM No comments: