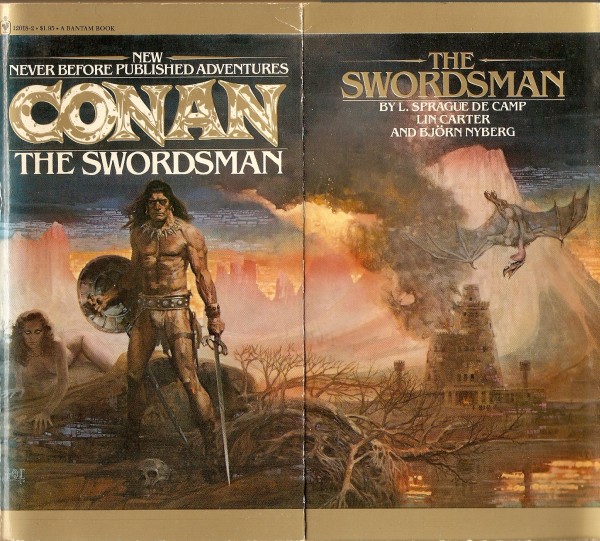 Howard pastiches really kicked off in the late 1970s, and 1978 seems to have been a kind of watershed year. The release of the beautifully-illustrated but poorly-written Conan and the Sorcerer seems to have been the starting point, but it was quickly followed by the short story collection Conan the Swordsman that same year, which makes a much more favorable impression.

Returning Conan to his short story roots produces work much more in line with what Howard created, and some of the stories here are surprisingly good. The work here is credited largely to Lin Carter and L. Sprague de Camp, though I tend to think de Camp did most of it, as you can pretty much tell when Carter is writing, given his addiction to faux-archaic words and sentence constructions that make the narrative sound like Yoda is writing it. The style used by de Camp is much more straightforward, and while he never manages that fever-pitch quality Howard hit with his action, he does pretty well.

The stories here are just classic pulp workouts that are entertaining even if they are derivative. “Legions of the Dead” is a straightforward tale of brutal violence and grim savagery, while “People of the Summit” (rewritten from a story by Bjorn Nyberg) is just a great pulp story by any measure, even if it does borrow more than it should from “The People of the Black Circle”. “The Gem in the Tower” and “Moon of Blood” are similarly gripping, bloody adventures, and even the weaker stories here, like “The Star of Khorala” are readable.

One interesting feature here are the in-between-story notations about the course of the rest of Conan’s life. Carter and de Camp seemed to work at putting the events of Conan’s life as depicted by Howard into some kind of logical order and then set to filling in the gaps, as it were. For instance, Howard tells us that Conan spent a great deal of time as a pirate, but only one story - “The Pool of the Black One” - really depicts an episode of his life during this period. Other stories touch on it, but it remains an underexplored part of the character, and thus ripe for pastiche and homage. “The Gem in the Tower” is a very fine example of this, filling in a cracking adventure while still fitting into the broader continuity.

From this start, the business of detailing Conan’s life in more detail was off to the races. Entire novels like The Road of Kings and The Sword of Skelos filled in events we had only previously been told about. It set the stage for how such works are handled even today, though by now Conan has had so many adventures that one human lifetime could never have time for them all.

The upside is that this book contains some really good stories that manage to capture a lot of the feel and mood of the genuine article. Too many authors have stumbled through their Conan imitations, not seeming to really care if they get it right, but unlike the weak Conan and the Sorcerer, Conan the Swordsman successfully gives you a reason to keep reading.
Posted by New Iron Age at 3:18 PM No comments:

Slave of the Black Tower

Ashari dwelled in her gilded world of silken curtains and perfumed nights, looking at the stars in the black sky, watching them fall in trails of fire while she breathed dreaming smoke and brooded on her future. She walked the halls surrounded by her coterie of followers and sycophants by daylight, but when the red sun set she was alone, and glad for it. The harem was a beautiful cage, but a cage nonetheless. She had not felt the bars so keenly before, but now they seemed to close in upon her.

She had been the old emperor’s favorite, and had warmed his bed on many nights, using all her powers to please him, and in return her status within the palace was assured. No other girl could compare with her, nor would she ever bear the master a child. She was a perfect plaything, for her race were durable and long-lived, gifted in ways no human could match. She did not fear that age would steal her beauty.

But now the emperor was dead, and she felt a coldness in the air. Kurux was a new element, and thus far she had not been able to charm him as she had hoped to. He had not sent for her, nor for any of the women kept here for his pleasure. She had called to him with her dreams, as she was able to do, but he had not come. At court she wore her finery, all her jewels and silks, and paraded herself with her coppery flesh showing all she had to offer. She polished her horns and her hooves, painted her face, but nothing seemed to attract his eye.

Already some of the other lords of the court had made polite overtures, and she knew it was an accepted thing for past favorites to leave the harem and become concubines of lesser nobles, but she bristled at the prospect. She had enjoyed a place of prominence no other could match, and now it was gone, and she bitterly refused to simply relinquish it.

Only now she had done something unforgivable. Now, in a fit of anger at Kurux, she had freed his war-prize, the barbarian Shath, and she feared he would discover she had done it. She had watched as he sent guards pouring into the catacombs, seeking some sign of the escaped prisoner, and she had to wonder if someone had seen her that night, if someone would whisper her name.

She would not cower. She was a daughter of the Shedim, a race now almost extinguished, but who had once ruled their great southern empire with fire and blood. She had courage and strength no human could guess, and powers they only dreamed of. She would not be afraid.
Read more »
Posted by New Iron Age at 3:50 PM No comments: 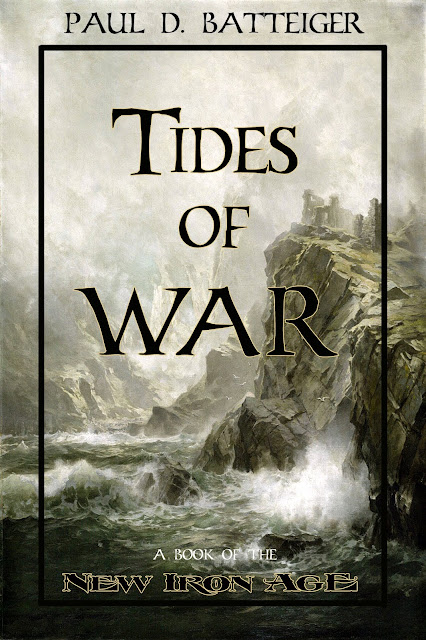 The ebook is here!  Collected are all 25 stories from last year's saga, all in one ebook with one low price.  Smashwords lets you download in any format you want with no DRM to get in your way, so there's no reason not to grab it.  You can buy the book HERE.

The red sun burned in the skies above the plain of R’sharr on the third day of battle, and the smell of blood crawled in the shadows. The ground was black glass scourged by some ancient blast of fire, and the razor edges cut men where they fell. Iron relics of another age jutted from the ground like teeth. The cursed earth would drink no blood, and so it ran down the dagger channels and gathered in pools beneath the sky.

There on the deadly ground the armies of the empire clashed with the war-hosts of the horned clans. The legions stood in their rigid ranks, shields locked and spears uplifted, and again and again they withstood the charge of the mounted enemy. The warriors of the clans towered above their foes, faces hidden behind their horn-crowned helms. They rode their black-scaled beasts to the attack, howling blood-mad to the black sky.

Again their charge crashed home, and at their head rode their battlemaster, Shath the Iron-Handed. He came at the tip of the wedge, like the keen point of a spear himself. In his hand flamed his ancient sword and his shield was like a wall of steel. Larger than any man, he surged into the ordered lines of his enemy and plunged into the madness of battle. He hewed around him, cutting down men to either side, and the black armor of the legionnaires could not stay the bloody edge.

All around him the armies clashed, and red ran over the glassy earth that spurned it. The legions held to their lines, stabbing in with spears from behind their wall of shields, while the men of the clans sought to batter their way through, hacking with swords and axes, their reptilian war-beasts clawing a path through before they were speared and brought down. The line where the foes met became again a welter of blood and bodies, and the war-cries of each mixed with the screams of the wounded and the dying.

Shath’s beast was cut from beneath him, coughing out a tide of blood through its tusks as it fell with a dozen spears embedded in its flesh. He set one foot upon the carcass and battered the enemy back with his shield, using his weight to dash them off their feet and then cutting them down with his sword, splintering spear-hafts and shields alike. He looked up, beyond the battle-line, to the place where black banners flew over the dark form of the emperor himself, seated upon his massive, armored war beast in a saddle draped in black and crimson. Shath pointed his sword at that distant shadow and swore he would spill the tyrant’s blood.
Read more »
Posted by New Iron Age at 3:11 PM 2 comments: