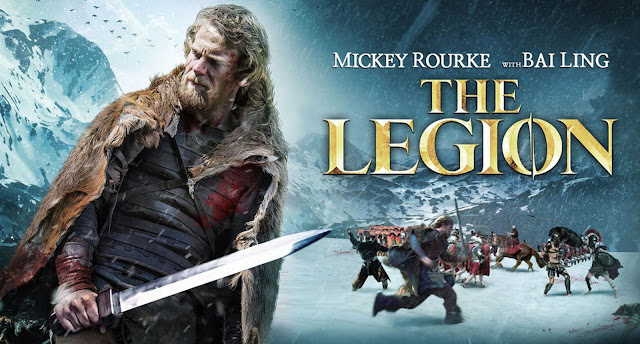 I’ve covered a lot of the old, classic S&S movies I thought were worth talking about, and I have reviewed some more recent efforts, but now for the new year I have decided to dig in on the offerings to be found on streaming services.  Streaming and the need for content has resulted in widespread distribution of movies that are Sword & Sorcery – or at least S&S adjacent – to a greater degree than anything seen since the Golden Age of home video first began in the 80s.  So let’s see what there is, and if any of it is worth seeing, starting with 2020’s The Legion.

First off, the way this movie is billed is highly misleading.  From the poster it looks like you will have Mickey Rourke and Bai Ling as unlikely companions battling their way through a forbidding landscape to get to some big battle scene at the end.  That’s not what this is.

Rourke is in this, but he plays a general who only enters the narrative at the end, while he gets some monologue scenes that are sprinkled through the movie like a framing device.  He’s not the star of the movie, and you’ll be glad of that, because this is probably the most embarrassing performance by an Oscar winner I have ever seen.  He has weird makeup on, including disturbingly long, fake eyelashes and what I swear look like Lee Press-On Nails.  You get the feeling he shot all his stuff in one day and is probably reading the lines off cue cards, as he mispronounces multiple Roman names and just generally seems like he doesn’t want to be there.

Bai Ling only has one scene at the end with Rourke, and it is like whatever the opposite of an Oscar clip would be called, as they both recite stilted dialogue in a dragging, deadpan style.  At the beginning of the film we get some scenes with Joaquim de Almeida and Vladimir Kulich which are bizarrely shot on a green screen set, as the backgrounds are static and there is a very obvious cutout line around everybody’s head.  Kulich at least manages to inject some drama into his performance, but de Almeida just isn’t trying at all.

The bulk of this movie follows a guy called Noreno, played by an almost unknown guy named Lee Partridge.  Noreno is chosen for a mission to cross from Armenia to Syria to bring a message to Rourke’s General Corbulo to come and relieve the besieged forces of General Paetus – following historical events that actually happened in rough outline.  Thus, we are supposed to believe the guy makes a journey of over 500 miles on foot in about 9 days – which you could maybe do if you traveled 12 hours a day without stopping, which is not what he does.

This could be a solid setup for a story, and there are some good things to recommend here.  Partridge is not bad, and has a kind of easy likability.  The costuming is pretty good, and the weapons are anachronistic, but mostly don’t look glaringly fake.  The fight choreography is not terrible, and manages some drama.  The music is actually quite good, and the cinematography is uniformly excellent.  The movie was mostly filmed in Asturias in northern Spain, and they took great advantage of the gorgeous landscapes and the sweep of the mountain vistas.  When you see a snowstorm, it’s an actual snowstorm, and the rock-climbing scenes show real climbing, not a dude on a green studio set.

The rest of the cast is mostly pretty bad.  The guys playing “Parthians”(or in Rourke’s dialogue “Parthinians”) all look Irish, mostly because they are, and while they are enthusiastic, they can’t do much with the bad dialogue.  Marta Castellvi is luminous in her brief part, but she doesn’t even have lines.  Bosco Hogan has some gravitas in his odd but better-acted cameo, but there’s really no reason for the scene to be there.

The big problem is that the script is very thin, and the movie is padded out with loooong sequences of Noreno just jogging through the wilderness.  Even though the landscape is gorgeous, it goes on too long and is extremely tedious.  The action is too little and too far apart, and everything is very slow and seems to go on way too long.  When there is dialogue, you wish it would stop, as the writing is painfully stilted and bland.  Even good actors can’t do much with this shit, and most of the actors here are either not good or not really making any effort.

While this is obviously influenced by movies like Centurion or The Eagle, it is nowhere near as good, and even a few good qualities cannot make it into something I would recommend.  The whole thing seems like it might be building toward a big battle scene, but that was obviously beyond the meager budget this production had access to, and The Legion ends with a whimper.  This is on Prime Video, but you can skip it.