The Valley of Winds

For the first time in her life, Jaya left the sea behind her.  All the days since she was born she had never gone beyond the smell of the salt and the sound of the waves, the cry of the sea-birds when dawn came or the winds at dusk.  Now she turned her path northward, away from the shore, into the mountainous heart of the island of Tarakan, away from anything she had ever known.

She passed through terraced farmlands, avoiding any contact with either her own people or the giants who traveled the black stone roads.  The land lay under mist and rain, and it was not hard to remain concealed.  It galled her to turn her back on scourging the invaders, even for a time, but now the tiger shrine called her, and she could not believe that was an accident.  If she would follow the will of the gods, she must be ready to answer when they spoke.  The forbidden heartland of her race called to her, and she would heed it.

The land rose up and up, the trees growing taller and the roads less well-kept, until once again she followed foot-worn trails through the mud.  On the third day she stole sandals from a farmer’s hut and strapped them on, for the way was becoming more stony and rough, and she believed it would only become more rugged as she climbed.  She had never seen mountains close, and the few glimpses she had through the stormclouds looked too far away and too immense to be real.

The path led upward, through a series of narrower passes between hills, and she saw fewer villages, fewer signs of the things of man.  Only here and there did faded columns or worn archways mark that once her race had built great things on this soil.  Stone heads watched her from the hillsides, half-covered with moss, their features all but worn away.

There was a last village, and she found it empty, the houses abandoned and the roofs falling in.  She found no bones, no signs of death, but the lodges stood empty, many useful things still inside.  Glad of the chance, she went inside and gathered dried meats, a new waterskin, and some javelins for hunting.  She found new laces for her sandals and spent the evening repairing them, cutting them to fit her better.  Already she had walked much farther than she ever had before. 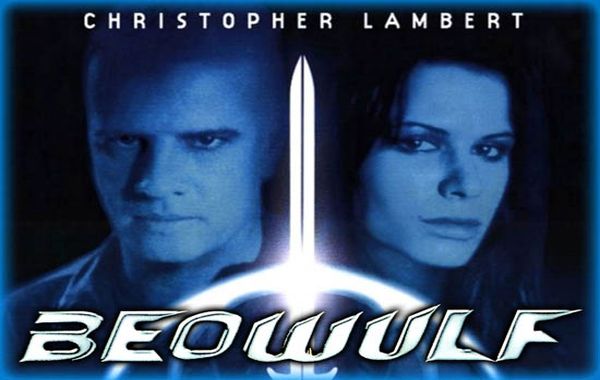 If you were counting down the worst adaptations of the Beowulf story (which I guess I kind of am), this one would be fighting it out for the bottom spot with the 2007 big-budget version.  I only rate that one as a bigger failure because that movie was a $150 million major studio effort with a huge amount of talent to draw on, while this one is a bargain-bin straight-to-video disaster of the kind that were all over video stores in the 90s.  With a bleached-blond Christopher Lambert in the title role and a then-unknown Rhona Mitra as his bland love interest, this one is a complete mess from minute one.

Rather than attempt a historical epic, this movie sets the Beowulf legend in a vaguely-defined post apocalypse, with Heorot replaced by an “Outpost” on an undefined border between warring armies of leather-clad S&M fetishists in ridiculous costumes.  Everything in the wardrobe design is way over the top, with horned helmets, spikes, straps, and skull masks.  You would think that would make it cool, but this is so cheap and so poorly filmed that it just looks dorky.

Hrothgar is not a king in this movie, just the lord of this bleak outpost that is now plagued by a monster that kills and blah blah – we know the deal here.  This kind of thing doesn’t have to be boring, but again, this is very badly directed, and so the performances are bad, the dialogue is bad, and everything just seems to take way too long.  Takes are long, the shots are static and just look at people doing nothing, saying nothing.  Everything comes off as tremendously awkward, like an amateur theater production.

They spent a lot of effort on the fight choreography, adding in a shit-ton of unnecessary backflips, jarring cuts, and wacky-looking weapons to try and inject some pizzazz, but it just comes off as tremendously silly.  Beowulf has an arsenal of weapons that seem to have been designed by 9-year-olds, including rapid-firing crossbows, a telescoping flail with a spike that comes out of the bottom, an axe that has a sword hidden in the hilt, and a bunch of daggers concealed everywhere in more and more elaborate places.  The backflips, in particular, look ridiculous, as Lambert’s stunt double will do literally 15 backflips away from the monster and then get smacked down anyway, so all that work never seems to do him any good.  His fighting style seems to be “when in doubt, do a backflip,” to the point that if you took a shot every time, it would kill you.

The Grendel design is kind of not bad, even if it has the expected Giger vibe to the look of it.  They obviously just had a cheap rubber suit, which they try to hide by putting a camera effect over it, to try and simulate the monster having some kind of field that makes him hard to see.  That’s a cool idea, but executed here it just seems like he’s got a blur filter on all the time, and it’s painfully obvious they are just trying to cover up the rubber suit.

Interestingly, this movie arrived at the “Grendel is Hrothgar’s bastard son” idea almost a decade before the Zemeckis movie.  When Grendel’s mother shows up, she is literally some Fredrick’s of Hollywood model in a wispy negligee and fucking crimped blonde hair (not kidding) who gives a long speech about killing Hrothgar’s men, leaning hard on the “hot blood pumping down my throat” and similar vulgarisms before she turns into a ludicrous CGI monster.  She looks like a spider made of bat wings rendered by a PS1, and has an entirely unconvincing battle with the backflipping hero until she is incinerated by the Outpost’s negligent fire safety standards.

It really is painful.  Believe me, if my description of this makes it sound like it might be a fun kind of terrible, it really, really isn’t.  It is mostly just boring and clunky, and Lambert especially seems like he is wishing he were somewhere else every moment he is on screen.  I only rate this as the second-worst Beowulf movie because it is just 80% painful to watch, as opposed to 100%.

Jaya followed the path, the dirt trampled smooth and hard by the passage of many.  It offended her to see it cut into the soil of this holy island.  She tried to harden her heart to it, knowing she would see many more such outrages before she was done.  She set her mind to eradicating the presence of the giants upon this land, and she swore she would water the earth with their blood in answer for their crimes.

The rains came, and she sheltered by night beneath the spreading leaves of a tamaka tree.  Soon the rains would come more heavily, and then the season of the monsoons.  She wondered if the giants could endure that, though if they had been here for years, they must know the way.  Part of her wished the islands themselves could drive out the invaders.  Then she thought that she was the answer to that – that the gods had called her because she was chosen to drive the enemy away.

Several days brought her to a place of wider fields, and she saw many of the Utani working in the long rows.  They cultivated rice and beans and breadfruit trees, and she watched them from a distance, laboring under the hot sun.  Here and there she saw giants moving among them, watchful and malignant, and she yearned to kill them, but she knew she could not become involved in a struggle here, so far from the seat of their power.  She must go to the sea, to the place called Jinan.