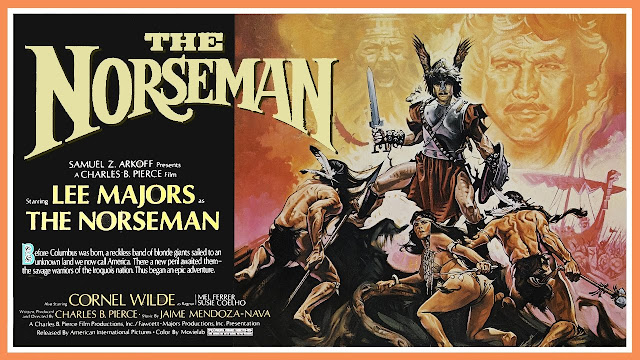 I have generally avoided reviewing some of the more notoriously bad films that burst out in the wake of the success of Conan the Barbarian in 1982.  There were a lot of shoddy attempts to cash in on the trend of oiled-up musclemen with European accents cavorting through cheap sets full of bikini models with feathered hair, and I have no particular desire to go through and skewer trash like Ator, the Fighting Eagle.  That said, I thought this one might have a bit more interest to it.  The Norseman came out in 1978 – before the barbarian surge – and was an attempt at actual historical fiction.  Turns out it is still embarrassingly terrible, but sometimes life is like that.

This was the big-studio directorial debut of Charles B. Pierce, who had made his reputation with the minor cult hit Legend of Boggy Creek, and this looks exactly like you’d expect a viking movie made by that guy would look.  The lead role is assayed by Lee Majors, who was then riding high on the popularity of The Six Million Dollar Man, and who seems to have taken the job as a bit of a lark, as it meant a Florida vacation between TV seasons.

This is ostensibly the story of a viking named Thorvald, who journeys to “Vineland” in search of his father, who vanished on a journey to the western seas years ago.  The longship they sail on looks pretty good, and seems to have been actually functional, as there are many shots of it tooling around the mangrove swamps where they filmed.  The ship is crewed by faded action star Cornel Wilde, walleyed character actor Jack Elam as some kind of wizard, and a host of Tampa Bay linebackers as background vikings, including one black dude, who is explained away with a throwaway line about a raid on North Africa, but otherwise doesn’t contribute any more than anyone else to this mess.

It turns out the missing King Eurich was captured and blinded by Native Americans, and he and some of his men are still kept as slaves.  None of the natives are played by actual indigenous actors, seeming to be mostly Italians and regular white dudes in long black wigs.  The Native costumes and general depiction are as shoddy and cringe-worthy as you would expect, given what kind of movie this is.

As such, there are not really any sets, save for the viking ship and the cave where the prisoners are kept.  The costumes are hideous, looking like they simply raided the prop rooms of older movies to come up with a bunch of plastic shields and helmets.  Said helmets have ridiculous-looking cow horns stuck on them – which might also have been plastic – causing the vikings to look like an invasion of bovines.  Majors wears a different style of helmet which seems to be influenced by the one Kirk Douglas wore in The Vikings, and it’s the only one that looks any good at all.

Everything about this is pretty painful.  The script is incredibly tedious, with long stretches of nothing happening, or scenes where people declaim things to each other.  Nobody acts in this movie, they just declaim.  The pace is glacial, and even at barely 90 minutes the movie feels extremely padded out.  Even when an actual fight scene breaks out, things don’t get better, as the action choreography is what I would call “nonexistent”, and there is a heavy use of slow-motion to further deaden any excitement that might leak through.  There is a little bit of fake blood, so it’s not completely G-grade, but there’s just not much going on here.

I find it hard to believe that Majors, who was then the star of one of TVs biggest shows, could not find something better to do with his time.  His casting is a misfire on a par with John Wayne in The Conqueror, as Majors is a similar kind of broad, American actor, and he’s not attempting any kind of accent or performance.  When he pulls out his plastic sword and starts to invoke “Our gawd Oden” the major reaction is to snicker.  If this had been made 20 years earlier, then it might have shared the screen with movies more like itself, and be remembered with a bit more affection, but in the 70s it was already a throwback to an earlier era, and not a good one.

I find it interesting that this movie arrived at a similar place as Pathfinder would almost 30 years later, though the point of view regarding the natives is completely flipped.  The theme of men, far from home, at war with a strange people and a strange land remains a compelling one, and could be made into something quite good.  Survival, savagery, a hostile wilderness and the strange powers of an unexplored world and mythology could be the basis of a compelling story, it just has not been done, or at least, not done well.